Hearts Cry Out Across the Sea 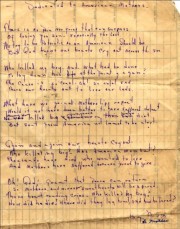 Nina McCarn wrote this poem in 1945 to express the grief that many American mothers felt during World War II when their sons did not return home.  It took Nina over 6 months to get information regarding her son’s death which added to her frustration.  You can feel the sorrow and heart in each word.

Hearts Cry Out Across the Sea

A Poem dedicated to American Mothers during WWII

There is no pain, nor grief that can surpass,

Of losing your son – especially the last.

We try to be patriotic as an American should be,

But God knows our hearts cry out across the Sea.

Who killed my boy and what has he done

To lay down his life at the point of a gun?

Tears our hearts out to lose our lads.

What have we gained?  Mother’s lips repeat.

Would it not have been better to have suffered defeat?

Many were killed by foreigners on foreign dirt

But sent from America not trained to be alert.

Again and again our hearts cry out.

Who killed my boy?  Has America won out?

Thousands have died who wanted to live.

And mothers have suffered because forced to give.

So mothers and wives and sweethearts will be spared,

Those heart rendering cries – Who killed my boy?

How did he die?  Where did they lay him?  And how he fared.

Mother of Harold B. McCarn. 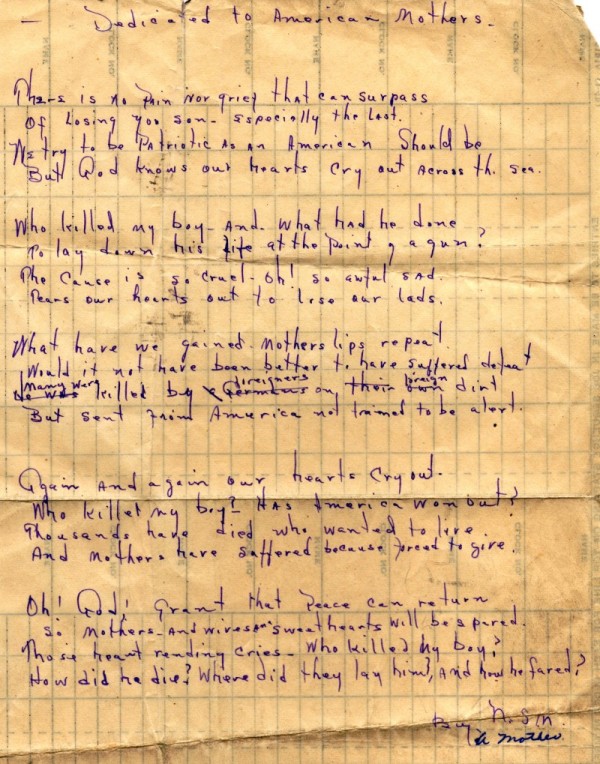