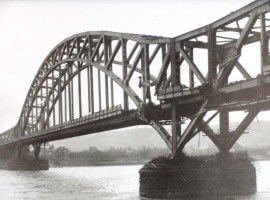 The Ludendorff Bridge at Remagen—the last standing on the Rhine—was captured by soldiers of the U.S. 9th Armored Division on 7 March 1945, during Operation Lumberjack.  Harold's unit crossed the bridge at Remagen.  After the crossing of the Rhine River, they were ordered to head east to capture the autobahn.   Harold and eight others in his unit were killed on 16 March 1945 east of the Rhine River in Germany along or near the autobahn.  World War II in Europe would end 53 days laters on 8 May 1945 with the surrender of Germany.

Although the bridge's capture is sometimes regarded as the "Miracle of Remagen" in U.S. histories, historians debate the strategic importance of the capture of the bridge at Remagen. General Eisenhower said that "the bridge is worth its weight in gold". However, few U.S. units were able to operate east of the Rhine ahead of the main crossings in the south, under Generals Patton and Bradley, and in the north, under Field Marshal Montgomery (Operation Plunder). Ultimately, only a limited number of troops were able to cross the Rhine before the bridge's collapse. However, the psychological advantage of having crossed the Rhine in force and in pursuit of the retreating Wehrmacht improved Allied morale while communicating disaster to the retreating Germans.

In the immediate days after the bridge's capture, the German Army Command desperately attempted to destroy the bridge by bombing it and having divers mine it.
﻿