The Henri-Chapelle Temporary American Military Cemetery looked nothing like it does today. The temporary cemetery was a farm field that had been selected by the graves registration unit in September 1944. Graves were dug continuously from the mid-September 1944 to the end of March 1945. The dead soldiers would arrive in the uniforms that they were wearing at the time of death. Soldiers who died at the aid station where often collected with little or no clothing on their bodies. The graves registration personnel would carefully collect all personal items from each body and inventory them. Then the soldier's personal belongings would be placed into a small drab olive bag that would be sent back to the states to eventually be forwarded to the next of kin. The bodies were placed into white mattress covers. They were lowered into their temporary graves, and then covered with dirt as a chaplain, when one was available, said a short prayer. A painted wooden cross with each soldier's name and serial number was placed on the grave. The temporary Henri-Chapelle Cemetery #1 was large; it held 17,332 Americans and 191 Allied soldiers. 10,030 Germans were buried in a location just to the south.

After the war ended, there was a repatriation program. An offer was extended to the immediate next of kin to exhume their loved one and return the remains to the United States for burial. The next of kin could also choose to have their loved one interred at Henri-Chapelle Military Cemetery once it was converted from a temporary military cemetery to a permanent one.  On July 27th, 1947 the repatriation program began. This involved disinterring all the German soldiers buried at the Henri-Chapelle Temporary Cemetery #2 and moving those remains to a new location at Lommel, Belgium. Then all American soldiers had to be disinterred. They were placed in caskets which lay above the ground. The first group of soldiers scheduled to be repatriated to the United States were placed on a barge and taken up the Maas River to Antwerp, Belgium. At Antwerp, the ship "Joseph V. Connolly" was loaded with the remains of 5,600 fallen American soldiers. Over 30,000 Belgian people turned out in October 1947 to honor those who had given their life to free Europe from Nazi oppression. The ship arrived in Brooklyn, New York on October 26th, 1947; while a large crowd viewed the solemn occasion. The caskets were unloaded and sent by train to each soldier's hometown.

Once all soldiers were reburied in the new location, there was a beautification program which gave the cemetery a nice appearance compared to the temporary cemetery during World War II. The graves were still marked with painted wooden crosses and there were no monuments. On May 14, 1949 Executive Order #10057 transferred control of the military cemeteries to the American Battle Monuments Commission. The Henri-Chapelle American Military Cemetery and Memorial was completed and the dedication ceremony was held on July 9, 1960. This is the beautiful location that you see today.

The fallen soldiers were treated with proper respect and I am forever grateful to the men of the 607th Graves Registration Company and their successors that served at Henri-Chapelle. They had the horrible assignment of retrieving, cataloguing, and burying our fallen loved ones. Thanks to the men who served in the Graves Registration Units during World War II.

After the war ended, there was a repatriation program. An offer was extended to the immediate next of kin to exhume their loved one and return the remains to the United States for burial. The next of kin could also choose to have their loved one interred at Henri-Chapelle Military Cemetery once it was converted from a temporary military cemetery to a permanent one.﻿  Below are some photographs for this time period which began in 1947. 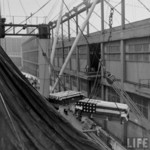 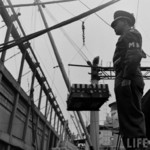 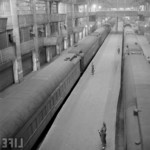 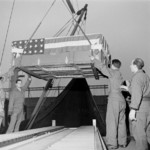 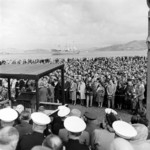 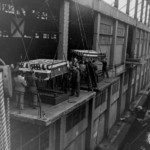