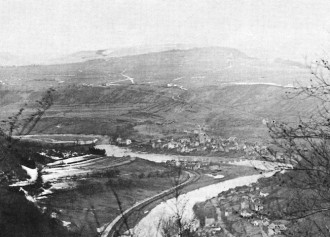 During December 1944, Harold's unit, the 60th Armored Infantry Battalion, 9th Armored Division﻿, was stationed on the Luxembourg German border.  They repelled the German advance to take Luxembourg City during the action known as the Battle of the Bulge.

The Battle of the Bulge (also known as the Ardennes Offensive and the Von Rundstedt Offensive) (16 December 1944 – 25 January 1945) was a major German offensive (die Ardennenoffensive), launched toward the end of World War II through the densely forested Ardennes Mountains region of Wallonia in Belgium, hence its French name (Bataille des Ardennes), and France and Luxembourg on the Western Front. The Wehrmacht's code name for the offensive was Unternehmen Wacht am Rhein ("Operation Watch on the Rhine"), after the German patriotic hymn Die Wacht am Rhein. This German offensive was officially named the Ardennes-Alsace campaign by the U.S. Army,but it is known to the English-speaking general public simply as the Battle of the Bulge, the "bulge" being the initial incursion the Germans put into the Allies' line of advance, as seen in maps presented in contemporary newspapers.

The German offensive was supported by several subordinate operations known as Unternehmen Bodenplatte, Greif, and Währung. Germany's goal for these operations was to split the British and American Allied line in half, capturing Antwerp, Belgium, and then proceed to encircle and destroy four Allied armies, forcing the Western Allies to negotiate a peace treaty in the Axis Powers' favour. Once accomplished, Hitler could fully concentrate on the eastern theatre of war.

The offensive was planned with the utmost secrecy, minimizing radio traffic and moving troops and equipment under cover of darkness. Although Ultra suggested a possible attack and the Third U.S. Army's intelligence staff predicted a major German offensive, the Allies were still caught by surprise. This was achieved by a combination of Allied overconfidence, preoccupation with their own offensive plans, and poor aerial reconnaissance.

Near-complete surprise against a weakly defended section of the Allied line was achieved during heavy overcast weather, which grounded the Allies' overwhelmingly superior air forces. Fierce resistance, particularly around the key town of Bastogne, and terrain favouring the defenders threw the German timetable behind schedule. Allied reinforcements, including General George Patton's Third Army, and improving weather conditions, which permitted air attacks on German forces and supply lines, sealed the failure of the offensive.﻿

Source Wikipedia - Battle of the Bulge