January to March 1945  for Company "A" - Dillingen to the Autobahn 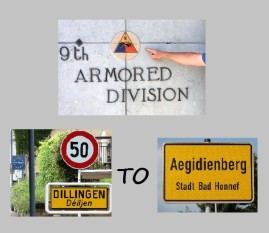 Follow the day by day actions of Company “A”, 60th Armored Infantry Battalion, 9th Armored Division from 16 December 1944 where they first encountered the German army at Dillingen, Luxembourg to their capture of the Autobahn on 16 March 1945.

Dillingen  to the Autobahn

16 December 1944 – German army crosses into Luxembourg and begins the Battle of the Bulge (southern flank) with an attack on Dillingen, Luxembourg  (zoom)  (large).  Company “A” is in a defensive position on a hill overlooking the village.

18 December 1944 – The remnants of Company “A” begins a withdrawal from Beaufort, Luxembourg  (zoom)  (large).

19 to 25 December 1944 – Fights a series of defensive actions falling back to Savelborn, Luxembourg  (zoom)  (large).

Until 23 February 1945 – at Distroff, France resupplying and receiving replacements

01 March 1945 – Attacked and captured Wollersheim, Germany.  (zoom)  (large)﻿  This attacked was made possible by  the capture of the Schwammenavel Dam by units of the 78th Infantry Division.

08 March 1945 – Defended Remagen Bridge while occupying high ground in Sinzig, Germany﻿  (zoom)  (large)﻿  This was to prevent a possible Geman counter attack on the bridgehead from the south.

16 March 1945 – Captured and secured autobahn between Ittenbach and Aegidienberg, Germany.  (zoom)  (large)﻿  At 1900 hours the 60th Armored Infantry Battalion is relieved and marched to the rear to rest for four days.  PFC Harold B. McCarn was one of the men who were killed in action that day.